Lecturer Bruno Latour, sociologist, anthropologist and philosopher of science, invite spectators to test the hypothesis of a parallel between the time of the astronomical revolution and ours.

When Galileo directed his tele­scope to the sky in 1609, he discovered mountains on the surface of the Moon, making it another Earth, and the Earth one of many stars. He thus disrupted the cosmic order, but also the political and social order of his time. Four centuries later, researchers James Lovelock and Lynn Margulis discover a ”moving” Earth, in another sense: they describe a planet where space and time are the products of the actions of the living. They force us to change our world view and our understanding of the cosmos. And, once again, the whole organization of society seems to be in question.

We invite spectators to test the hypothesis of a parallel between the time of the astronomical revolution and ours. Are we experiencing a transformation of the world as profound and radical as that of Galileo’s time? One thing is certain: we no longer know exactly what planet we live on or how to describe it. It is not a single Earth, fixed and stable, but a multitude of planets that appear before us, and that we must explore to know on which to land. Moving Earths stages the spectacle of thought in the making. The audience watches a philosopher who thinks with his hands, on the set, like a craftsman at work. On his desk: books, documents, an Ipad, photographs, a notebook, machines, optical instruments, chalk – objects that he grabs and by which he builds his reflection. 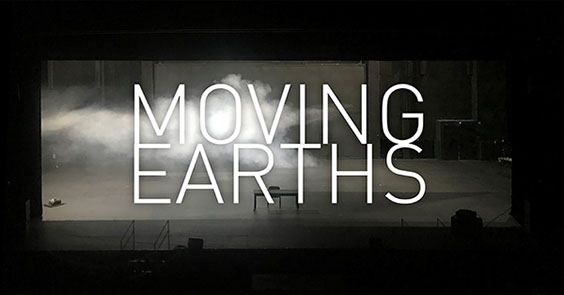